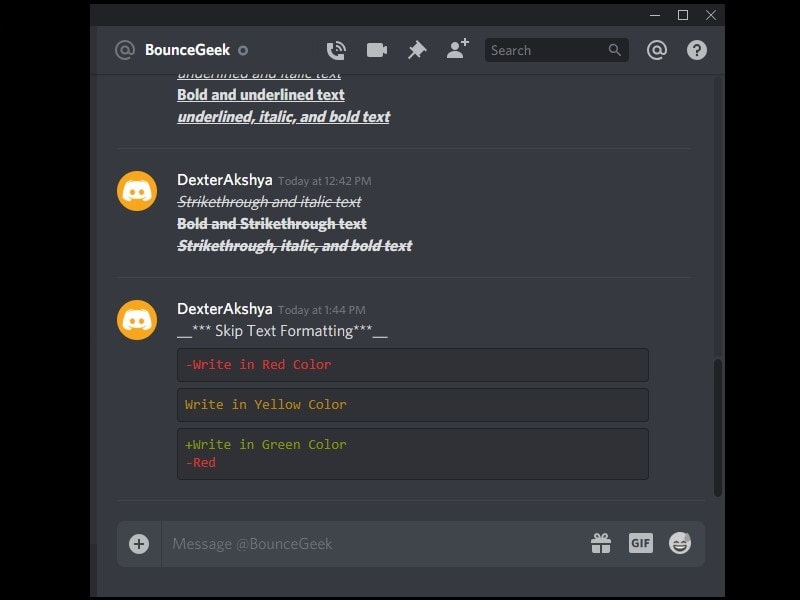 If you a newbie in Discord and recently joined a Discord Channel. Then you might be surprised to see, how people are typing in colors, underlines, bold, and Strikethrough Text. Yes, you also can do the Text Formatting on Discord. And for that, you have to know syntax codes. Actually, Discord uses Markdown language. And, Markdown helps to inject some flavors while chatting in Discord.

Markdown is basically a lightweight markup language, developed in 2004. Often Markdown is used to format the README files. And, it is also used in many online discussion forums. To create rich Texts using a plain Text Editor. Or, we can say that it is a text-to-HTML or XHTML conversion tool for web writers.

Don’t get confused, Markdown is not an HTML replacement, not even close. Because the syntax of Markdown is very small. And, corresponds to a very small subset of the HTML tags. Basically, it uses symbols to format words. That’s why Discord developers decided to add to the core software.

Before we get into Discord Markdown to format your messages. You need to know, to make colors possible in Discord Chat, developers added the Highlight.js library. Though, Discord doesn’t have true full-text coloring or highlight options. For example, in the sentence, you can’t make one word blue and another red.

How to Format Text in Discord.

First, by using some basic Markdown Syntax. I will show you, how you can format text in bold, Italic, strikethrough, and underline.

Write in Bold text in Discord.

Creating Bold Text in Discord is quite easy. You just have to Start and End the text with two asterisks (*). That’s it. For asterisks sign press the Shift + 8 key on your Keyboard.

(Don’t get confused, you can write any word between two asterisks, and make it bold.)

As you can see in the above screenshot, I have added two ** or asterisks. So in any sentence whatever ‘word’ you want in Bold format. Just type that text between two **.

For Italic font also, you need to use the asterisk. But, You just have to use one asterisk instead of two.

As you can see, I have added one asterisk to the start and end of the word. Which I want in Italic Text Format.

How to write in Bold+Italic in Discord. (Syntax Code)

Now, as you know that, for Bold font, we use two asterisks. And, for the Italic font, we have to use a single asterisk. So, if we combine both, we can write in Bold Italic font together.

How to strikethrough text on discord.

You already know what strikethrough Text is. A horizontal line through the center of the Text. Basically, a typographical representation of Words. So, if you want to cross out text in Discord. Then, you have to use the ~ tilde symbol two times. Just add, two tilde symbols (~~) at the start and end of that word, which you want to cross.

Usually, on a standard English keyboard, you can find the tilde (~) symbol below the Esc Key. And, to use it, Press that Backtick (`) key with the Shift.

How to Underline a Text in Discord.

Sometimes, we do underline a word or phrase. To indicate that word as special or give emphasis. And, if you want to do that in Discord, then it’s possible with an underscore symbol.

As you can see, I have added two Underscore or Underline symbols. Before and after the word. And, after sending it in Discord, there is an underline in that text.

Ok, now you know the basics of Text Format in Discord Chat. You can combine symbols and be creative. For Example, you can combine underline with the Bold, Italic.

Here is an example of it.

Another Example of Strikethrough and Bold Italic Combination.

If you want to show an asterisk, underscore in your text. And, don’t want to do Text Formatting in Discord. After that, you can use the backslash (\) key. And, it will skip the markdown and show the text with symbols.

That’s it. It was basic markdown text formatting. Now, we will move on to some advanced chat formatting in Discord, like Colors.

For Single line Code Block, you have to use tick or backtick (`). And, you can find out it below the Esc key. (Don’t press it with Shift.)

For the multiple-line code blocks, you have to use three backticks (“`). And, write your Text within those backticks.

You can write as many lines as you want, just have to add three backticks.

Change the Text Color in Discord.

Normally in Discord Color Changing isn’t possible. But, Discord markdown does support Syntax highlighting for different languages. Colors will only appear inside the code block. And, the mobile version of Discord does not support Coloring. And, not all colors are supported, there are some specific colors that you can use. Basically, we are going to use Highlight.js, which is running in the background of Discord.

There are some limitations also. In some syntax highlight language, the text should be connected in one word. This means, you have to use underscore and type like this – Discord_Text_Coloring. (Not in all languages.) I know you’re more interested to know, how to write in colors on Discord. So, let’s start.

Note: Due to some reasons code block syntax appearing wrong after publishing the article. Please check the screenshot to understand better.

As you can see we are using diff syntax highlighter in the code block. And, we have to add a dash (-) before the line, which we want in Red Color.

For the Red-Orange Color Text, we have to use CSS Syntax highlighter. And, you have to put the sentence into a bracket.

Color Text into Yellow in Discord.

This is the simplest syntax for Yellow color. Just type text in the Fix Syntax code block.

For the Red color we use – Syntax. And, for the Green, you have to add + before the sentence, in diff syntax.

For Blue color text, we are using INI syntax highlighting. And, the sentence should be inside brackets.

For Blue-Green, you can use CoffeeScript, CPP, JSON, or bash syntax. And, you have to put text under quotation marks.

On Discord, you can also turn your text messages into speech. Though, many Discord users keep the TTS feature turned off. And, unfortunately, the TTS command works only in Discord PC or the web version of Discord. As of now, for mobile users, it’s not available. Yes, mobile users can open discord in the browser and request discord desktop mode.

To use TTS (Text to Speech) in Discord, just type /tts and you will get the option to write your text to speech message. Type your message and press enter key.

So, these are the syntax to format Text in Discord. Yes, still there are many color code syntax available. And, I will keep updating this article. That’s why you can bookmark it. Also, If you want to share Computer Screen using Discord. Read my article on “Screen Share on Discord Server“.