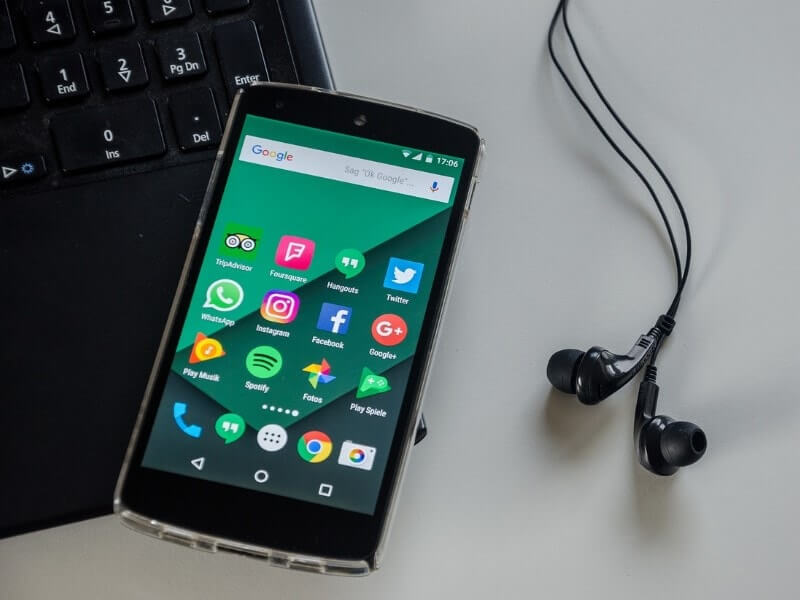 There is only one powerful mobile operating system available, Which is Android. Android is known for its customization and ability to do any task. And, the Best part is you can replace your Android OS by installing custom ROM. Apart from customization and Android features, It is known for Automation. The first best App created to automate your Android device is “Tasker”. But tasker is a little bit complicated for beginners. That’s why In this article am going to tell you about some best tasker alternative or best Automate App.

What is the Automate App?.

Automate App allows to do various tasks at once automatically. You can create multiple profiles and can set multiple tasks for each profile.

For Example – With the help of Automate App, You can create a bedtime profile and set few task like – turn WiFi off, decrease brightness & silent device. And at the night by tapping on bedtime profile you can execute all these tasks at once.

There is no doubt that Tasker App is best Automate App. Yeah, It’s the little bit complicated for beginners, but when you start using it you will like it. The only bad thing about tasker app is there is no trial version available.

Tasker is good but it doesn’t mean that other Automate App is bad. There are some Free Automation Android Apps available, which comes with the user-friendly interface. So, If you want to know about some best tasker alternatives then follow this article.

If you’re searching for an Automate App with the good user interface, then MacroDroid is the best App for you. The best thing about this App is, It supports NFC Tags Automation. You can write automated tasks on NFC Tags and can use NFC Tags Android. Like Tasker app, you can create the custom macro or can automate tasks.

For Example – Toggle the power button to tell you time, Auto respond to incoming SMS, Turn on the WiFi connection when you launch a specific App.

With the free version of MacroDroid App, you can create only 5 Macros. And free version comes with ads, Which is not annoying. If you want to get rid of from ads and want to create unlimited macros, then you need to pay for it. The app requires accessibility service, So make sure accessibility permission is enabled. The best thing about this App is it’s Free and comes with NFC write feature. That’s why we can use it as Tasker Alternative.

In five steps you can easily create a Macro using this App.

If you don’t know what Triggers is – It is an instantaneous event that device detects to run Macro. For Example – If you want to run a Macro when the battery reaches 20%. Then tap on battery level and select battery decrease percentage 20. 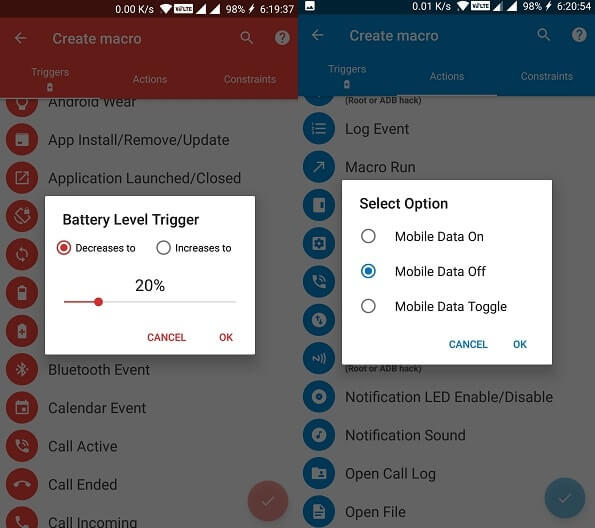 Again swipe right from actions and next thing is constraints, which is optional. Constraints used to allow or prevent the macro from running.

After choosing constraints to tap on the right mark and select category, enter the macro name and click on OK button. 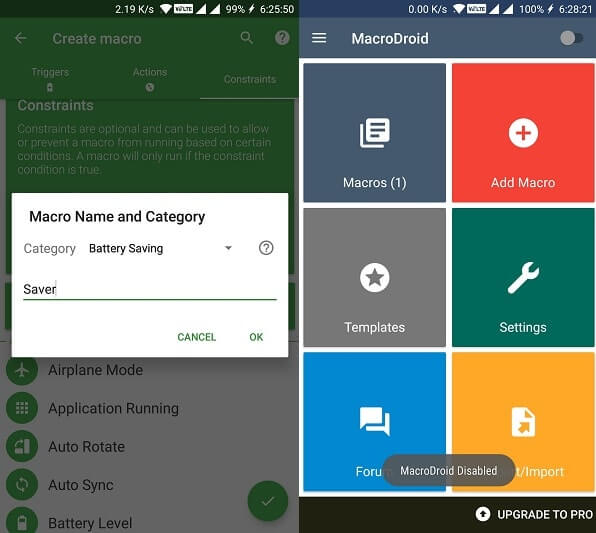 Note:- Make sure MacroDroid is enabled and running in the background, else created macro will not work.

If you want to run dozens of automated tasks at once then this App is best Tasker alternative for you. With Automate App you can create automation using flowcharts. All you need to do is just create blocks and connect all dots to create automated tasks. The app comes with the daily backup with Google option, Which helps you to take backup of created automated tasks. 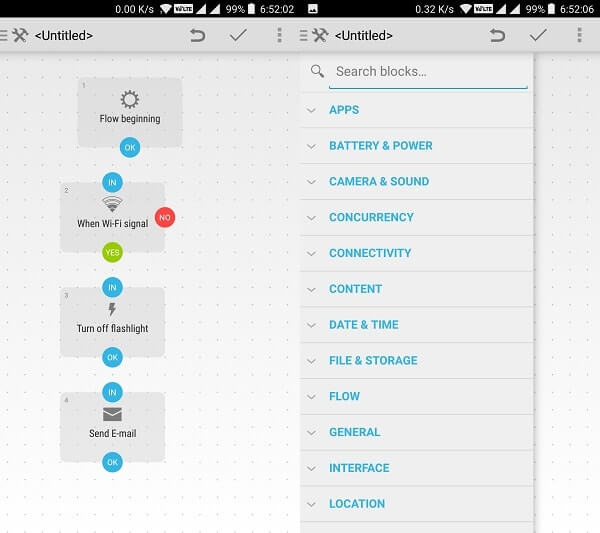 Automate app comes with multiple extensions that you can install according to your need. To use media, network, storage and other tasks you need to install extensions first. Creating flow chart with automating app is quite easy.

Get Automate App from Google Play.

Open App clicks on “+” icon and then swipe from the left side.
Here you can see all triggers and actions that you need to automate your Android device.
Choose actions and triggers and set them in flow by holding it.
After creating the flowchart of automated tasks, Now you can save it and you will able to see macro on the home screen.
To execute a macro you need to download all required permission extensions. Then you can hit the start button to execute.

After MacroDroid the only App that offers good user interface, It is Trigger App. Although you can use it as Tasker Alternative, many Triggers are paid. And if you want to try out all triggers for free then you can Signup for 7 days free trial. Trigger app allows to write and erase NFC Tags, which is the good thing. The app comes with plugins options, that you can access by swiping left side. 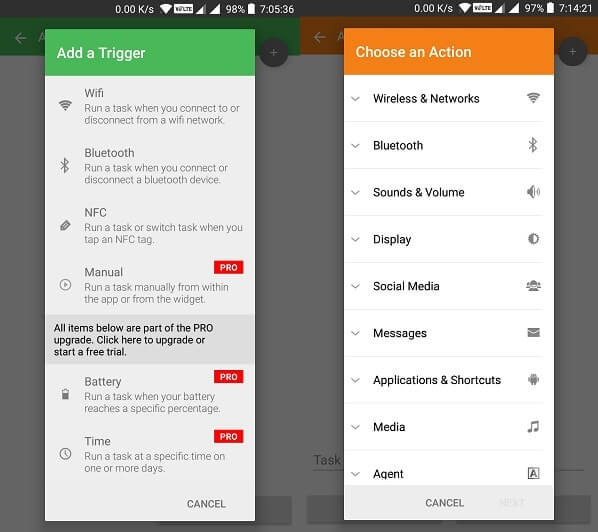 Get Trigger App from Google Play.

Creating automate task with Trigger App is quite easy. Tap on “+” Icon now choose trigger and you can add restrictions also.
After setting up trigger tap on next button to add actions that you want to add. Now you can enter the macro name and can set the macro.

When it comes to Android Automation none app can beat IFTTT. You can control everything with your voice and Google Assistant. The app comes with tons of pre-loaded applets. You can turn on any applets by tapping on it. The Best part of this app is it comes tons of Macros, So you don’t need to create the new one. This App works with many apps that everyone uses daily like Twitter, Google Drive, Instagram, Gmail and many others. (Total 400 Apps) 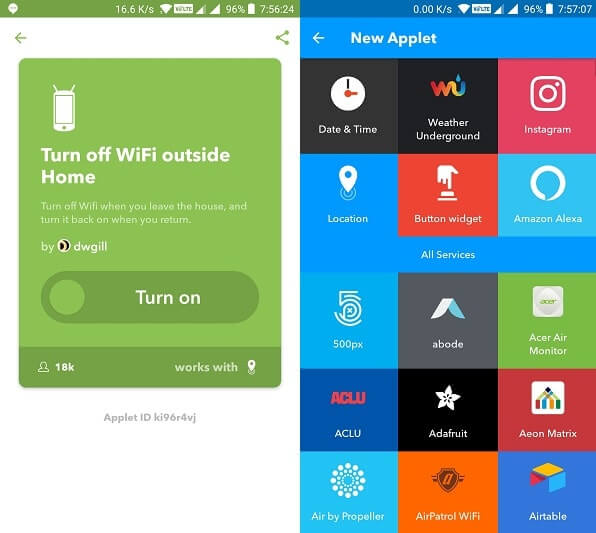 With IFTTT App, You Can backup or share your photos automatically. Can turn off WiFi when you’re outside of a home. Start playing music when you connected to Bluetooth devices. Un-Mute phone, turn Bluetooth off when you disconnect Bluetooth devices. You also can trigger events based on your current location. If you don’t like preloaded applets then you can new Applets from the store. Overall it is the best tasker alternatives app that you can use to automate your Android device.

Get IFTTT App from Google Play.

These are the best automate Android Apps, that allows automating your Android device. Although, there are many other apps available for Android automation. But some of them are paid and some apps are copied version of these apps. If you’re still confused which app you should try first, then download MacroDroid App. Because this app supports NFC Tags feature. And if you find this app complicated then try IFTTT App.