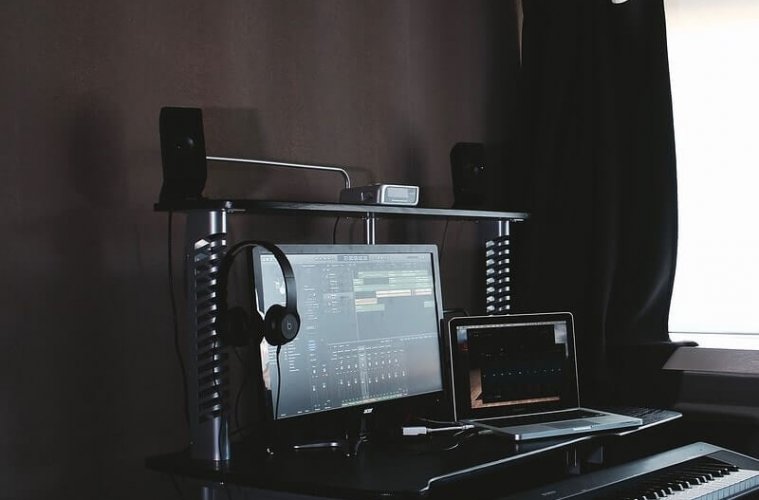 When we search for – “GarageBand for Windows”, Numerous of fake sites appears in search results. These sites promise you to provide a ported version of GarageBand software, and when you hit the download button it redirects you to Apple App Store. In this article, I am not going to provide you any ported version, because there is no such version Available. But, If you’re using good specification computer, then I am going to tell a way to get GarageBand for PC. And, if you’re using an old computer (Old hardware), then you can check GarageBand alternatives.

GarageBand is a music production software and digital audio workstation, that is available only for macOS and iOS devices. It is developed by Apple, and it’s a part of iLife software suite, that’s why it is not available for windows OS. With the help of GarageBand, you can create and podcasts.

This software is quite famous, because many big musicians like Rihanna and Fall out boy (Rock Band), uses this software to record and edit their hits. If you’re a Mac user, then you can easily get it from Apple App Store. But if you’re a Windows users, then you don’t need to buy MacBook, just because of GarageBand. Because Windows is capable to do much more things than you think of.

GarageBand is powerful software, and to run it requires at least 2 GB RAM and a powerful CPU. And MacOS also required minimum 4 GB RAM and powerful CPU, to run smoothly in Windows. So, make sure you’re using the high-end computer. Else, your PC might get stuck, or you”ll face some performance issues.

Install Mac on Windows – There are two ways to install & run mac on windows.

Follow this guide – How to Run Mac on windows, using VirtualBox.

After installing MacOS with the help of above-mentioned link first set up your Apple ID. Then simply open Apple App Store, from App store icon available in the Dock. Then search for the GarageBand software and download it on your virtual Mac. 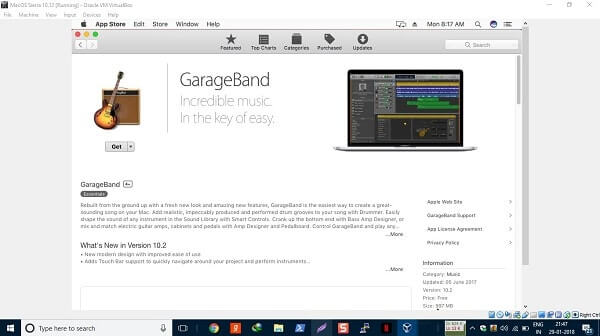 That’s how you can get, GarageBand for Windows 10. But if your PC isn’t capable to install and run macOS inside Windows. Then you can try, some “GarageBand Alternative”, which provides the almost same feature.

There are many digital audio workstation software available, which I already mentioned in “Best Music Production Software” Article. So, before checking out these GarageBand alternatives, I suggest you read that article.

LMMS (Linux multimedia studio) was first developed only for Linux Distros, later it’s launched for windows also. It is a free digital audio workstation application program. It allows to create and edit music similar to, GarageBand software. The visual appearance of LMMS isn’t like GarageBand, but it provides numerous of good features. The first impression of LMMS will make you feel like photoshop of music. 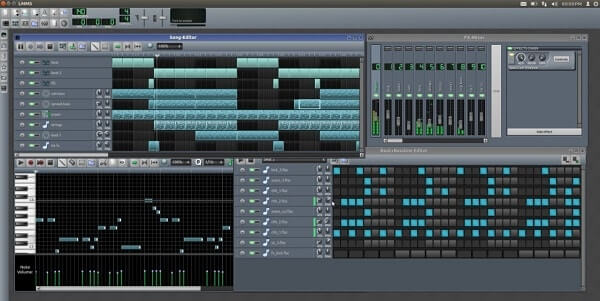 It accepts GUS patches and sound fonts and it can import MIDI (Musical instrument digital interface) and hydrogen fires. You can also import FL studio project files but FLP support have been removed by the developer. With LMMS you can read and write customize themes and presets. And you can export audio in two formats – OGG and WAV. The software comes with many editors like – Song, Beat + Bassline, Piano roll, Automation. With the FX mixer, you can also able to mix an unlimited number of channels.

With LMMS, You can produce music by – arranging sound samples, synthesizing sound (BitInvader, FreeBoy, Kicker and many other) and by combining the sequencers and trackers. Overall, it is a perfect software for music creation. And after using it you don’t need to search for “GarageBand for Windows”. 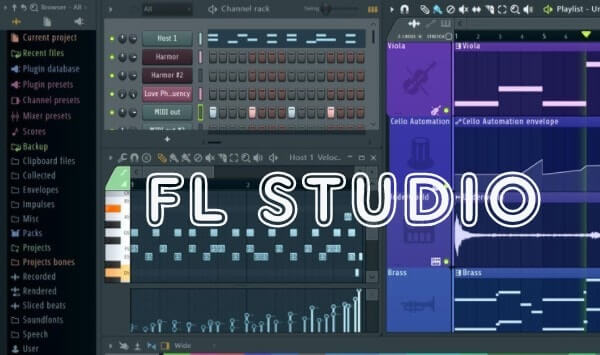 The software comes with multi-touch support (for mixer also) and step sequencer can get detached from the main software window. It allows to compose, arrange, edit, mix and record professional quality music. The new version of FL studio which is 12, comes with some advanced features. FL Studio 12 comes with hundreds of copyright-free samples to create songs. VST support also available in the software, and installation & discovery is improved in new design.

FL Studio comes with real-time stretching, which allows real-time, independent tempo and pitch variations. The software comes with the variety of plugins and generators (synthesizers). It also supports third-party VST and DirectX Plugins. It is bundled with a numerous of sound effects and common audio effects for music creation.

GarageBand for Windows isn’t available but “reason software” available. The “reason” is premium quality music making software, that comes with all required features. It comes with fully loaded instruments, sound, and effects that music needs. You can mix, create, edit and compose music with this digital audio workstation.

The reason software provides a virtual rack, that builds itself when you create the song. It automatically fills the rack with devices as you need, to get good sound. It’s effects and instruments cover every need from acoustic to synthetic and electronic. With reason, you can record first and can pick tempo later with real-time Stretch. 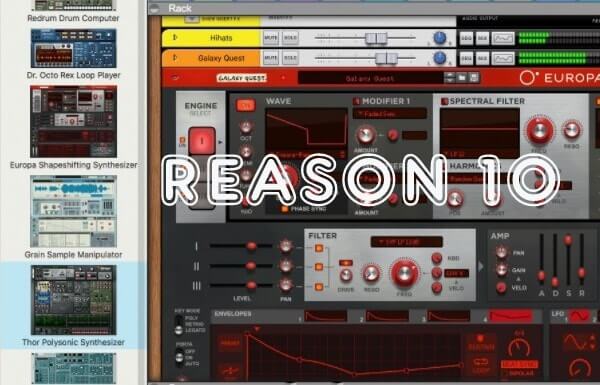 This music creation and GarageBand alternative come with VST plugin support. That allows adding any effect and instrument plugin to software’s rack. It comes with unlimited audio recording (depends on your storage capacity) and instrument channels. There are tons of features that this software provides, you can get a list of features from software’s official site.

The software provides premium features, so obviously it isn’t free. But still, it comes with 30 days Trial. And if you like the software, and want to unlock more features, then you can pay 399 USD. 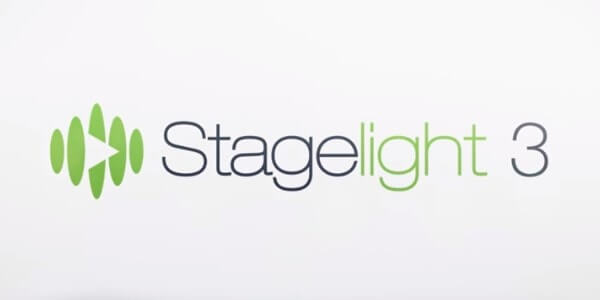 Stagelight is professional music creation tool, GarageBand Competitor, that packed with royalty free sounds. With Stagelight program, you can build beats, create mashup loops and songs. In this music production software, you can also add your own sounds or can take control of your created mix. The software is available for all major platform Android, MacOS, and Windows. Although it doesn’t offer the similar feature that GarageBand does, still you can create professional quality music with it.

It comes with virtual instruments and effects, 7 drum kits available, which you can expand also. Stagelight comes with the live mode, which allows testing different loops and audio clips together. The user interface of StageLight is simple and user-friendly, anyone can create music with it. Stagelight is free until you don’t need Additional content. And you don’t need to search for “GarageBand for Windows”, After using it.

When it comes to audio production software, nothing can beat REAPER. It is a digital audio workstation that comes with multi audio recording tool, which makes it GarageBand alternative. The current version of this program is available for Windows, macOS, and Linux. REAPER is free for 60 days, And none of its features is locked in the free version. It works like the host to popular plugin light VST and AU and you can import all media formats in it.

No doubt, It is cheaper than FL studio and comes with the highly customizable user interface. REAPER provides 300 plugins, which gives you enough material to create professional quality music. REAPER isn’t a video editor, But still, it can be used to cut and replace video files and also you can replace audio. Some common video effects like wipes, fade, crossfade also available. It also comes with the variety of effects, including ReaVerb, ReaDelay, ReaPitch, and ReaEQ.

These are the alternatives of GarageBand Software, that you can use in Windows and Android Devices. But, still you want GarageBand for Windows, then it only can be possible with virtualBox. And it requires lots of RAM and Intel Core i5 and higher processor. That’s why I suggest you try out music production software from this list. If you’re still confused, which one you should try out. Then download LMMS, Because it’s free and comes with lots of features.