Best SNES Emulator for Windows, Android & For All Platform

In English, there is a proverb “Old is Gold” and it also applies to the gaming world. Some gamers are spending time playing new high graphic games like Sniper Ghost Warrior, The walking dead, GTA V, and others. While some 90’s kids like me want to play those old SNES games, In the old days the only way to play those SNES games is a Console. But now if you don’t have a gaming console then also you can play those old games using some Best SNES emulators.

What is SNES Emulator?

If you’re a new-generation kid then you might be not aware of SNES (Super Nintendo Entertainment System). It is a 16-bit home gaming console (like PS4) developed by Nintendo that was first released in 1990.

SNES Emulator is a guest system that enables the host system (Windows & Android) to run SNES games. In simple words, it’s software (for Windows) and an App (for android) that allows you to Play Old SNES Games. If you want to play Nintendo DS games, then you can also try Nintendo DS Emulator for Android.

RetroArch is most popularly known as the Best SNES Emulator which allows us to play many emulators games. It’s available for all major platforms like Windows, Android, macOS, iOS, Linux, and many others.

2. Once the RetroArch.7z file gets downloaded extract it using 7Zip software.

3. Once RetroArch is extracted, open extracted folder and then run retroarch as administrator. 4. Once RetroArch gets open. Click on Online Updater > Core Downloader.

5. Scroll down and then select the “Nintendo – SNES/SFC (Snes9x – Current)” option. 6. Once the core gets installed, go back to the homepage of RetroArch by clicking on its icon.

9. Now select the SNES game from the file and then click on Open. 10. That’s it, the game will start running. You can enjoy your favorite SNES Games.

If you find the RetroArch emulator complicated then you can Install the Snes9X Emulator. It is easy to use SNES Emulator for Windows 32-bit and 64-bit. You can load SNES titles in this emulator with just one click. The snes9x emulator is developed completely in C++ language. So you can run it even on a low-end PC. It offers output image processing, which leads to improved graphics. With this emulator, you can even record gameplay and speed up games. You can also save the state of GamePlay and resume the game from where you left off. Netplay feature is also available to play multiplayer games with friends. Netplay will work better with LAN Gaming.

1. Download the latest version of the Snes9X Emulator Zip File and Extract it.

2. Open the Extracted Zip File. And, right-click on the “snes9x-x64” file and then click on run as administrator. 3. Once Snes9X Emulator gets open. Click on File > Load Game. 4. From the file selection window do select the Snes9X emulator ROM file and then click on Open.

5. That’s it, you can now play your favorite SNES Games. It is another advanced open-source SNES Emulator that offers minimalist UI. The emulator is mainly focused on low audio/video latency. The best part is this emulator is it does support all new and old versions of Android devices. Personally, I have tested it on Pixel 6a running on Android 13. And, it works flawlessly in it. 1. First, install the “Snes9x EX+” app from the play store and open it.

4. That’s it, the SNES game will start running.

As I mentioned above RetroArch is available for all platforms and Android is one of them. Retroarch is not only allowed you to play SNES games also you can play other classic games because it’s an in-one Emulator. If you want to play other old gaming console games then only Install them on your android device, else use other emulators that am going to tell you about.

1. To run SNES games on your android device, First, install RetroArch from Google Play. Or you can directly install it from its official Website.

2. Installing core and run content (SNES Game) process is similar to android and windows. You need to install the Snes9X core file, to do that go to Load Core and then scroll down until you find SNES/ Super Famicom (Snes9x). 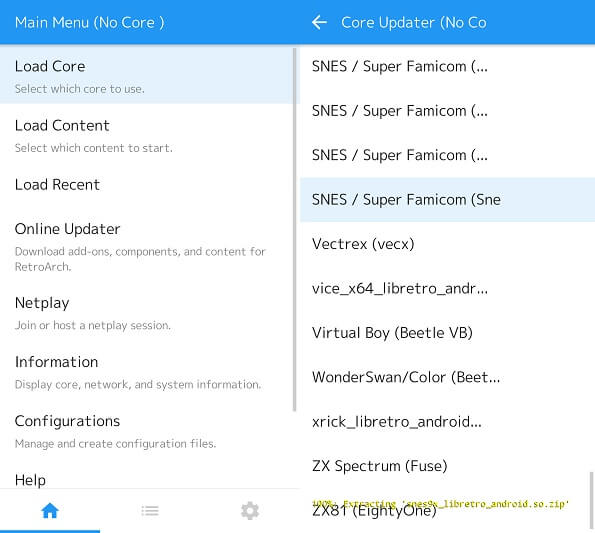 3. After updating core time to Run the SNES game, go back to the home screen choose to load content, and select game ROM File. That’s it now you can play SNES games on your Android device.

If you only want to play SNES games on your android device and don’t have so much space to Install RetroArch. Then SuperRetro is the best option, the size of this Emulator is around 5 MB. And the best part is you don’t need to load core and browse games manually, it will auto-detect all SNES games loaded on your device. 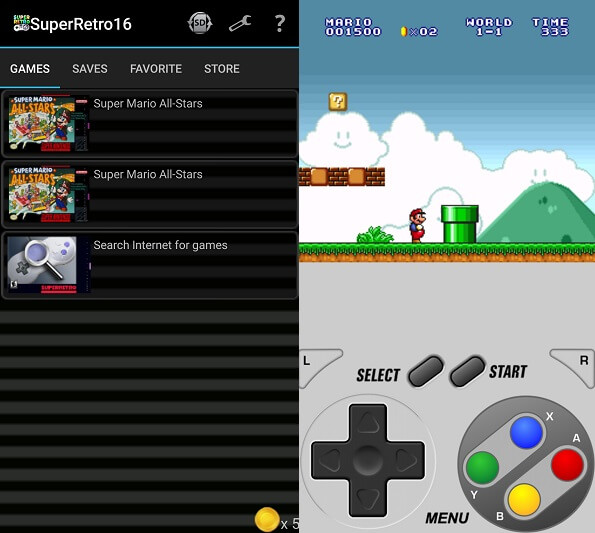 To Run SNES Games using SuperRetro simply Install the app, and make sure your device has SNES games files. Now just open the app and it will scan all games on your device, all you need to do is just tap on the app to Play. As of now, SuperRetro removed from Play Store, you can install it from third-party sites.

Note: The original SuperRetro 16 Lite has been removed from the play store. Which you can download from third-party sources. Yes, there is another app available with same name, but that doesn’t seem to work.

Still, there are dozens of Emulators available on Google Play, But some are paid and some provide pathetic gaming control. These two are the best and Retroarch is available for all major platforms so it’s the Best SNES Emulator.