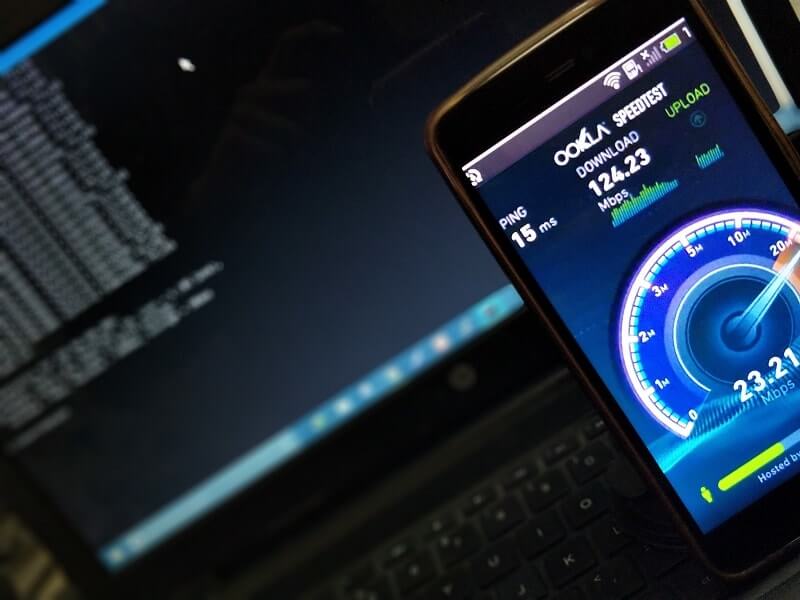 Facing network issues like delay while gaming and streaming videos online?. Then undoubtedly it could be packet loss issue. Packet loss can occur on any network connection – Wireless or wired network. Mostly this issue occurs in wired connection due to the modem, network line or maybe issue from ISP side. And, yes you can fix packet loss, but to fix packet loss first you need to find out the actual cause of it. Before start telling about methods to fix, first I am going to tell you about few things related packet loss.

What is Packet Loss?.

What is Packet?. – A Packet is the unit of data that is transferred from an origin point to a destination on the internet. In other words, when we send any file from one place to another, TCP (Transmission Control Protocol) layer divides files into small pieces (chunks). And those small pieces of data known as the packet.

Packet Loss – And Packet loss occurs when one or many packets of data fail to reach the destination. There could be multiple reasons behind packet loss – Network Congestion, weak radio signals due to distance, faulty hardware or drivers.

As I mentioned there could be multiple causes of packet loss (Data Loss). Before start telling about “How to fix Packet Loss”. Here am going to tell you about few major causes, So you can find out the exact cause of Packet loss.

The Main cause of packet loss is network congestion. What is Network Congestion?. – In data networking (Data transferring) when a network node or link carrying data more than it can handle. In other words when a network carries data beyond its capabilities then TCP layer drop some packets. That’s why packet loss, queuing delay and new connection block problem occurs.

For Example – While playing online games we face some lag at few point. Because on that point data is greater than our network can handle. Another example is while video calling with someone we face voice delay, this situation also occurs due to network congestion.

Before reaching data to your network, it travels through multiple devices. If any network device is full of data, and there is no new room for data to stay in the queue. Then network device discards few packets of data, and users won’t able to notice packet loss. If Application that downloading data is good, it slow network speed for few minutes and then re-transmit data.

If your bandwidths are working fine but still you’re facing lag then the issue is with your router, firewall or switch.

How to Fix Packet Loss Occurs due to Network Congestion?.

Increase the bandwidth of the congested network or link, Adjust the MTU size. – The bandwidth of routers depends and refers to many things. It is measured by router connection, router ability to handle and forward requests. And if you don’t know how to increase bandwidth then call your ISP, If you’re facing the high amount of bandwidth.

Now you” ll able to see a list of network adapters and MTU value which is listed on the left side. All point to point protocol connection have a default MTU size which is 1500. And for VPN connection default size of MTU is 1400. Here am using PPP connection that’s why MTU size is showing 1500.

Check MTU size is correct or not?.

Type the following command at the command prompt, Here my current MTU value is 1500 that’s why am entering 1500 in CMD. The first check you’re using command then replace it with 1500. 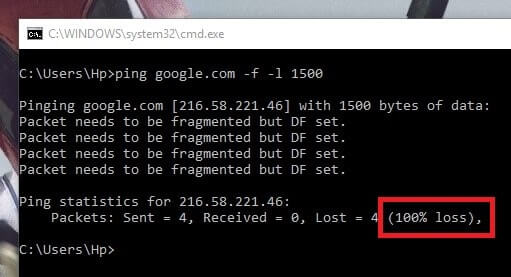 If MTU size is right for your internet connection then you” ll get a success message. Else you”ll get a packet loss error like am getting.

What to do when CMD shows packet loss message?.

First, you need to find out correct value of MTU, So try pinging MTU Value until you get success message (0% Packet Loss).

After getting right MTU size now it’s time to change MTU limit. But before start typing next command add 28 in your correct MTU value. For example – If you’re using 1460 value to ping then at the time of changing value add 28. 1460+28=1488.

Type these command according to your connection –

How to Cast YouTube from Phone to PC without Chromecast

Using wired internet connection then the problem might be on your router and it’s component. It’s sound weird but if you sending and receiving the high amount of data that your router can’t handle. Then also packet loss situation occurs, but you can fix this problem easily.

If your bandwidth is appropriate but still facing dropped packet issue then undoubtedly problem is with your router. For Example – If recently you upgraded your internet connection from low bandwidth to high. But still, network speed or performance is same then you need to change router immediately.

And before start replacing router check for cables, phone filters, and other connected components. If any cable is faulty then packet loss also can occur.

Outdated network driver also can be the cause of packet drop or packet loss. If you’re noticing performance issues on your network then you also start noticing few bugs on PC through system logs. This issue can easily fix by updating network driver or if the driver is already installed then first uninstall it then reinstall.

How to check for outdated network Drive?.

Open the Command prompt and type the following command to find out packet loss. 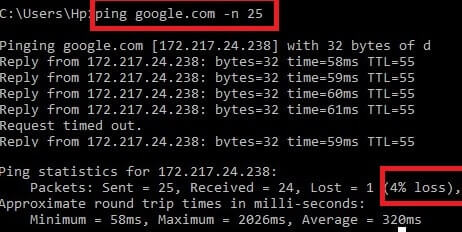 This command will ping google 25 times in real time so you can see any inconsistency. You can use any other site to ping or you can use your DNS servers.

How to packet loss fix –  If you’re getting packet loss error then first check your Ethernet Cable, Router, modem settings. Also, try this test on different computers using the same network connection. Changing MTU limit will solve this issue but still, you’re facing packet loss then. The problem is not on your end then call the technician to come in your house.