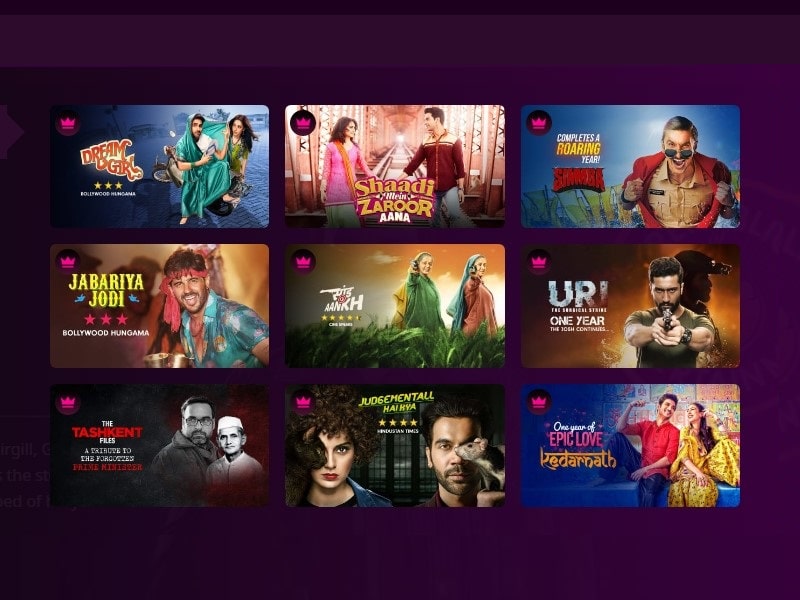 We can’t deny, that, Bollywood releases the highest number of movies per year among all other entertainment industries. And, as a movie buff, many of us prefer watching movies in theaters. But, it’s not possible to watch every movie in the theater. Yes, television is a good option, but we can’t watch the movie we want. Even, nowadays many Hindi movies come on the streaming platforms only. That’s why streaming movies online is a good option. There are plenty of sites to Watch Bollywood Movies Online Free. But, not all of them are legal, which means those sites offer pirated content.

I can understand, downloading pirated movies might be a convenient option for many. But, these sites can put your computer at risk. Your Computer might get affected by malware. Yes, you might have installed some antivirus or programs like Malwarebytes. But, it’s better you have a look at our list of sites to watch Hindi Movies online legally.

Hotstar is definitely a boon to all Bollywood Movies buff. It lets you watch Bollywood Movies Online for Free. And, you don’t need to Sign up to watch content, all movies are legal. You just have to look for the movie’s thumbnails that don’t have premium written on it – because, those movies are free. There are only a few movies that require signup and Hotstart subscription to watch. But, comparatively, Hotstar subscription is affordable than other streaming platforms. Because, Hotstar is the digital partner of many production houses, so it offers the latest Bollywood Movies after release. 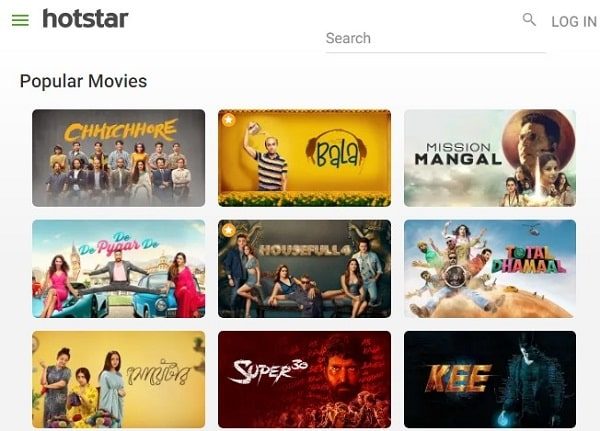 Apart from Free Hindi Movies, there are separate sections for TV Series, News, and Sports as well. Moreover, the TV Series section has content from 30 channels, owned by Star India. If you’re a sports enthusiast, then you can watch cricket, tennis, football, etc. Hotstar Premium cost around ₹999/Year and ₹299/Month. That will give you access to many premium Movies, TV Shows, Live TV, and an uninterrupted, ad-free experience. Hotstar Premium lets you watch the latest American TV Shows, minutes after America.

Though, no doubt Netflix has the largest collection of Movies. But, when it comes to Bollywood & South Indian Movies, Amazon Prime Video is a better choice. Prime Video recently bagged rights to movies from many big Bollywood production houses. So, you can watch many latest Hindi movies after a month of release. Apart from Bollywood Movies, you can watch many popular English TV Series like Dexter, Supernatural, The Originals, Suits and many more. Yes, there are some Hindi Amazon Originals Series like Mirzapur also available. Even, you can enjoy many stand up comedy by Indian artists too. 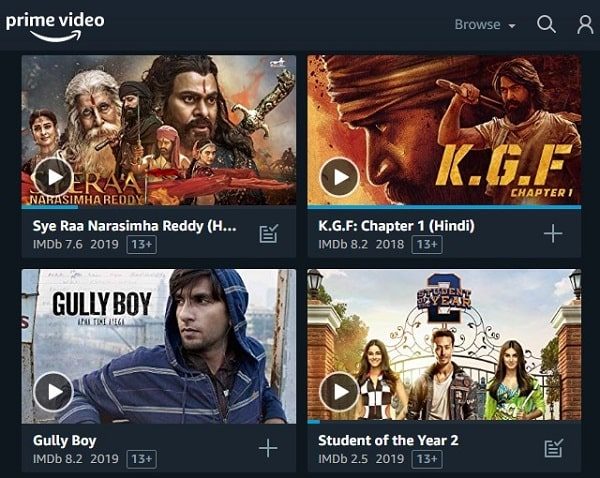 The best part about this streaming service is, it cost only ₹999 per Year. And, ₹129 per month. You can also avail 30 days free trial, and, can enjoy all TV Series and Movies for free. Amazon Prime Video subscription comes with many other benefits. You will also get access to Prime Music service and Free Prime Delivery.

So, Why you should subscribe to Amazon Prime Video?.

JioCinema is not popular like Netflix and Amazon Prime Video. But, it is the most widely used App from Jio’s Apps suite. JioCinema is the best site to Watch Bollywood Movies Online Free by telecom giant Jio. To Watch Movies from JioCinema, you just need a Jio SIM. Or, you can use your friend’s JIO ID, no separate subscription required. JioCinema site is well designed, and movie collection is way better than some other Apps. And, it also lets you watch Hindi TV Shows from other streaming platforms like Alt Balaji, Eros Now & Voot. 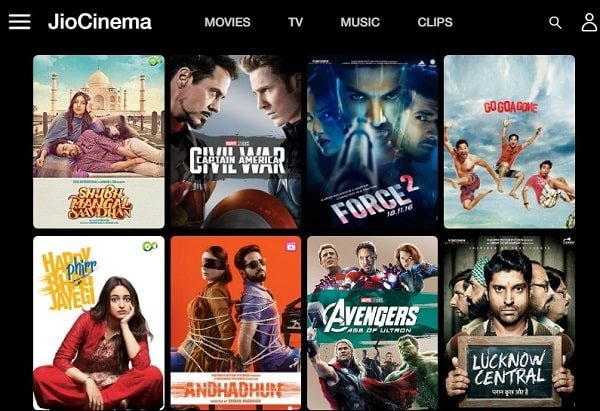 Recently, Mukesh Ambani-led Reliance Jio also announced to set up its own production house. And, soo you will able to watch many new Web Series and Short Films. Still, JioCinema is providing many latest Bollywood Movies after their theater release. So you can enjoy Movies, TV Shows, Music Videos, trailers and more all in one place. You get to watch some new Bollywood Films like Andhadhun, Made in China, Stree, Singham, etc.

Voot is Viacom 18’s advertising-led video-on-demand platform. Apart from Free Bollywood Movies, you can watch Telugu, Bengali, Kannada and English Movies for Free. Also, it offers a different section for Kids. Yes, you have to register to watch, but no card details required. Because Voot does show videos ads like YouTube. 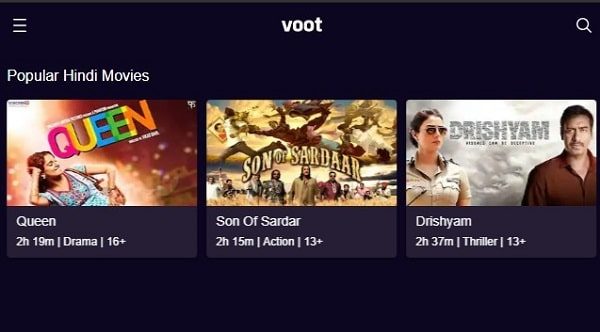 Though, Voot doesn’t add the latest movies frequently. But, Voot has a large collection of new and old movies. You get to watch some super hit movies like Gangs of Wasseypur, Bajirao Mastani, Ghajini, cocktail, etc. Voot App is available for all platforms, even for the Fire TV Stick.

Zee5 is kinda like Hotstar, I don’t mean the content is the same. Means, Zee5 allows Watch Bollywood Movies Online Free without signup. It has a large collection of multiple regional Movies, where, many movies are free. Just look at the thumbnails without the “premium” tag. But, if you want to watch some premium movies from Zee5. Then, you have to signup and subscribe. Though, the subscription is affordable, cost 999 INR per Year. There are some monthly plans and offers also. On Zee5, you can also watch Live TV from all ZEE channels. Zee5 is now in partnership with AltBalaji. So, like JioCinema, you can watch AltBalaji Shows in Zee5 also. 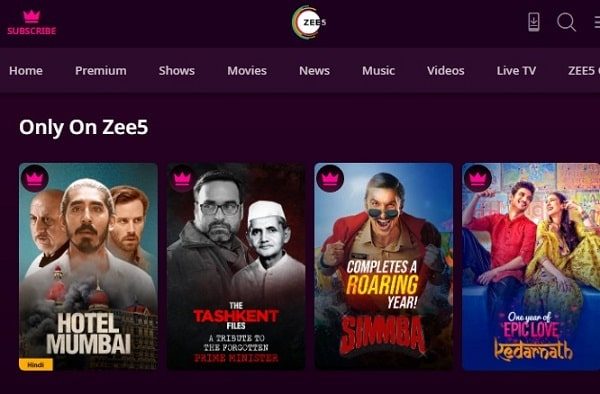 Zee5 has its own production house, so you will get to see some interesting Zee5 Originals. There is a cartoon section for Kids. On Zee5, you can enjoy some latest superhit movies like URI: The surgical strike, Dream Girl, Simmba, The Tashkent Files, Kedarnath, Simmba, etc.

Before, MX Player was just a video player for Android. In 2018, Times Internet Group bought it, and, it is now a media streaming service. Now, Company is using it as an OTT service, to offer TV Shows, Movies and Web Originals. MX Player has it’s own web platform, and, you don’t need to signup to watch movies. 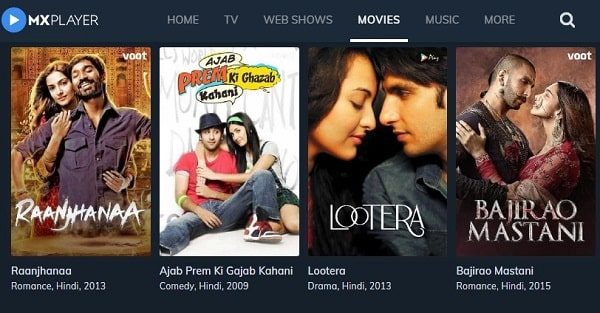 Apart from Hindi Movies, you can watch Indian TV Shows, News, Sports and can Listen to Music. You can also watch South Indian & Hollywood Dubbed Movies. Though, you won’t find the latest Bollywood Releases. But, there is a large collection of Good Movies. Even, MX Player also produce some MX Originals Web Series. MX Player is in partnership with TVF (TheViralFever).

Like JioCinema, Airtel Xstream is available for free Airtel users. The service can be used in 5 devices with a single Airtel SIM login. It offers many latest Bollywood, Hollywood and Tollywood Movies for free. Also, some major channels like Zee, Sony, Network 18 and all FTA Channels from India are added. The service can also be accessed by Airtel Broadband and DTH users. In Airtel Xstream, you can also watch the content of the HOOQ video-on-demand service.

Apart from free content, there is an Xstream Premium subscription section. That will unlock more movies and TV Shows. The free Bollywood Movies currently have movies like Manmarziyaan, Kahaani, Housefull, Badlapur, Golmaal, Housefull and many more. Airtel Xstream App is also available for all major platforms.

Yes, there is no point to add Netflix in the list of sites that offer free Bollywood Movies. But, recently, Netflix has introduced 199 INR Plan for Indian Users. In which, you can enjoy movies and TV Shows on your Smartphones. Though, I still suggest subscribing to 799 INR Plan. In which four users can watch from a single account. No doubt in it, that Netflix has a limited collection of Bollywood movies, in comparison to any other streaming service. (less than 5% of the entire Netflix content.) 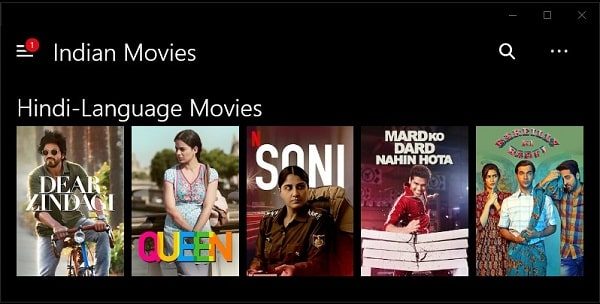 But, Netflix started producing Netflix Originals TV Series and Movies in Hindi. Series like Sacred Games, Typewriter is an example of it. Yes, Netflix is mainly famous for its English TV Series. But, now, Hindi dubbed version of many series available to watch. 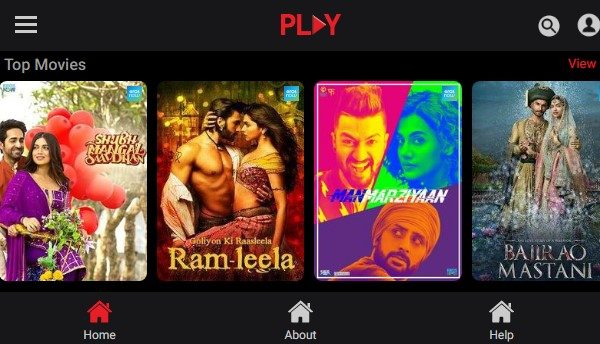 Like Airtel Xstream and JioCinema, Vodafone Play is free Movies Streaming App for Vodafone customers. Apart from OTT content, it offers Live TV Channels. It includes Bollywood, Hollywood and regional movies. Also, it offers content from Zee5, SonyLIV, Alt Balaji, Shemaroo, Sun NXT, Eros Now, HOOQ, Hungama, Hoichoi and many more. Yes, in comparison to Jio and Airtel, it offers more content. So, if you’re Vodafone customer, you can try this App or Site to watch movies and TV Shows.

If you’re looking for a site only to watch Bollywood Movies. Then, Eros Now could be the right streaming platform for you. It has the biggest collection of Bollywood Movies. It has over 1000s Indian movies with many exclusive TV Series & Originals. You can stream or even download movies, and, can watch later offline. Also, you can enjoy regional content, free music, and ad-free streaming. Eros Now subscription costs only 49 INR per Month and 399 INR per annual. There is a quarterly plan also of 99 INR, which comes with a free YouTube music premium. After subscribing you can watch in any device.