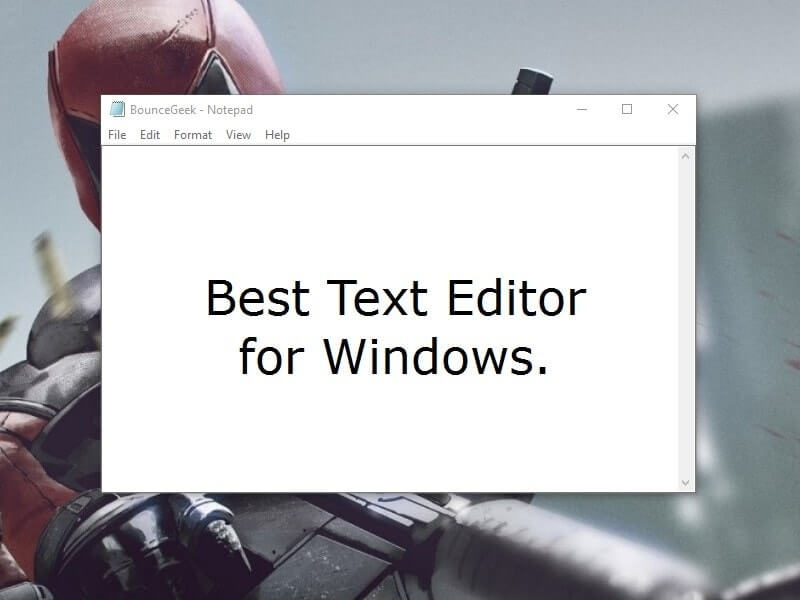 If you’re a writer or Programmer / Developer then you must be looking for “Best Text Editor”. A Good text editor always helps in saving time by providing good features. And if you’re an Android or iOS user then there are dozens of best note takings apps available. But Windows comes with a default text editor or writing tool called “Notepad”. Notepad is good enough if you’re not writer or developer, But if you’re then you should try some “notepad alternative”.

Why we need Notepad Alternative?.

Notepad is simple text writing and editing tool by Microsoft. But since Windows 7 launched, Microsoft didn’t release an update. The best text editor requires some feature which is missing in notepad like “Replace the text”. Sometimes while writing a program we mistype some keyword many times, And it’s hard to correct with notepad.

There could be the different reason behind you’re searching for Notepad replacement. But at the end, this article is all about some Best text editor for Windows which can replace your current text editor.

Notepad++ is a small free text editor that comes with tons of features which is missing in notepad. It is designed for developers to help them in write any language codes offline. It comes with windows integration, you”ll get an option “Edit with Notepad++” whenever you”ll right click on any document. Once you save a document it will autosave automatically whenever next time you write into it. 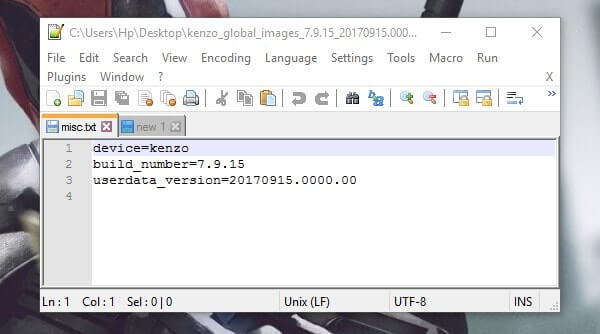 It comes with micro recording feature, Once you start recording and write something it will capture it. And when next time you run that macro it will start writing same text, Feature is quite helpful in some cases. As I said before text replacement option is missing in Notepad, but Notepad++ comes with find and replace option.

Tabbed document features also available, like the browser you can switch between multiple documents. It also supports multi-language environment, that provides function completion and provides parameters hint. Overall it is the best text editor, that can be a perfect notepad replacement.

Vim is the second best text editor that comes with many awesome features. It is available for almost all major platform like Windows, Mac, Android, and iOS. It’s a little bit confusing to understand whole features of Vim, But it’s worth trying. The main highlighted feature of Vim is split screen, you can divide a document into the vertical and horizontal screen. 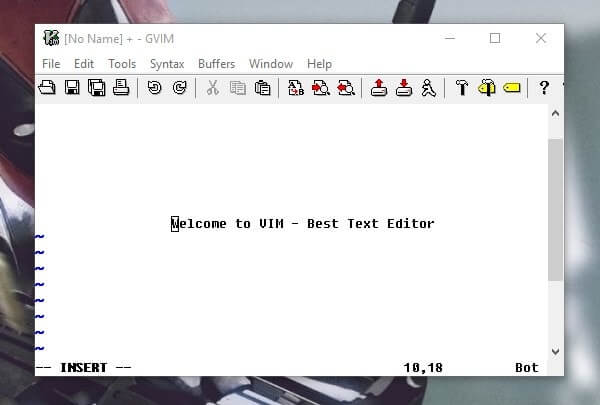 Macro recording and playback feature also come with Vim. It is basically an expansion of Unix vi Editor, the only thing you”ll not like about is “old school design”. Code completion, snippets of code and a built-in script for automation also comes with it. You can build tag in a text document, tabbed browsing is missing in this editor. Overall it is good text writing and editing program for Windows and another platform.

Atom is new generation free code editor for Windows, comes with highly customization options. It is available for almost all major platform like Windows, Linux, Mac OS X. It comes with built-in package manager – Which allows to add a new package or create one. You can choose packages from its open source directory – Atom packages helps to add new features. If you want to tweak the look you can do that, by using CSS and JAVA codes. 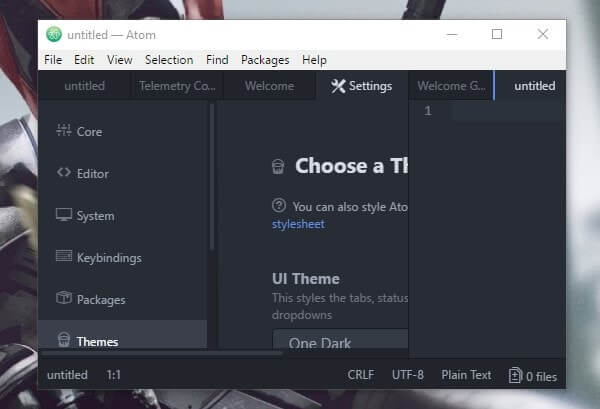 Atom comes with theme manager, which offers four UI and eight syntax themes. It helps in write codes faster, because of its auto-completion tool. You can also open multiple projects in just one window, which helps you in the switch between multiple projects. Find and replace option also available, you can replace any text within a minute. Overall it is the best text editor and dedicated to developers to create programs efficiently.

Apart from a text editor light table is next-generation code editor that is developed for coding. It is available for Windows, Mac OS X and Linux 64 – bit version. Like Atom, it is also completely customizable using extensions. You can embed anything in a light table like graph, games and running visualizations. It also comes with plugin manager which allows adding any kind of plugins like HTML, CSS, and JAVA. 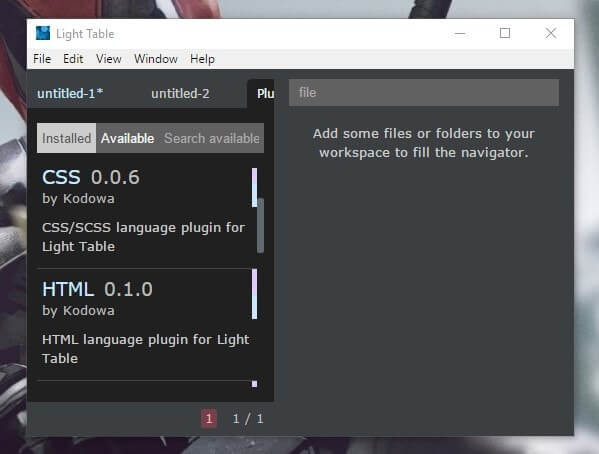 It supports tab interface like a web browser, so you can easily switch between multiple docs. Find and replace option also available, it appears when you press Ctrl+F hotkeys. It comes with commands mode, which helps in access all feature of it using some basic command lines. If you’re looking for a code editor then you should definitely check this out.

GetDiz is old best text editor for windows and a perfect notepad replacement. It is stable and comes in small size, the user Interface is handy and configurable. If you want to open a bunch of files at a time, then in explorer select “Allow only one GetDiz instance. And click on every text document that you want to open, it will show you one after another in the same window. 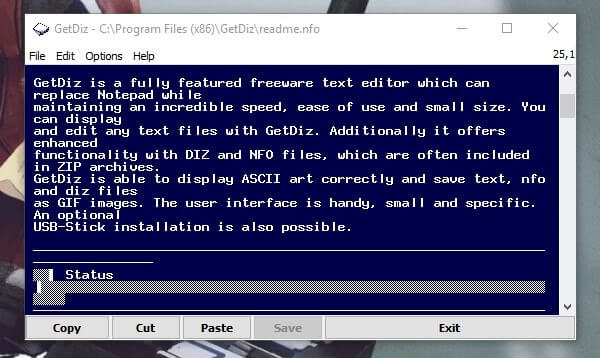 Should Students Be Allowed To Bring Electronics To Schools?

You can also set the specific font for a specific text file, GetDiz is also able to display ASCII art. Even it offers many features, still, the user interface of GetDiz is pretty clean. You can also install it on USB-Stick, an option will appear at the time of installation. It can also convert Unix/Linux text files to windows, overall it is good texteditor for windows.

It is an open – source Text Editor or plain text file notepad, Apart from notes it is also a to-do list manager. It is available for all major platform like GNU/Linux, Windows, and Mac OS X. You can insert images, table, code block, block quotes, file attachment and time in the notes. Comes with an inbuilt font editor, you can set any font for any note. “Add a tag to note” feature also included, you can add the tag and search note later with tag. 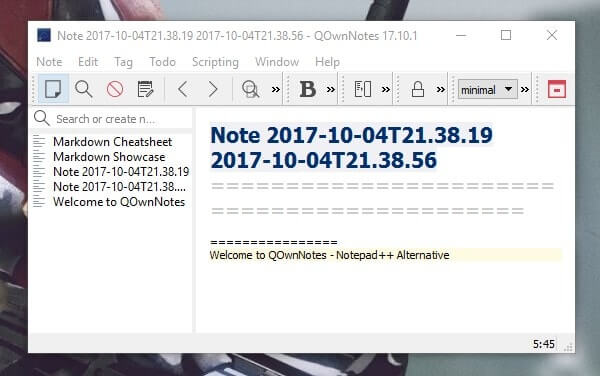 Script option also available, you can load scripts from an online repository and set a script. You can also sync notes with ownCloud or NextCloud client. And can retrieve notes later with any QOwnNotes program supported devices. There are some other features also available like markdown highlighting or markdown preview mode, encryption of note (AES-256), dark mode theme, free desktop theme icon, portable mode. Overall it is the best text editor and also known as Notepad++ Alternative.

These are the Text Editor/Code editor that can use instead of notepad. If you’re searching for notepad alternative then notepad++ is the best option. But if you need a program for write codes or you’re a programmer then try Atom. Else you can try any of these text editors after reading about them. That’s all folks, for now, If you know any other better option then feel free to comment.