100% GPU Usage while gaming, Is it Good or Bad (Explained) 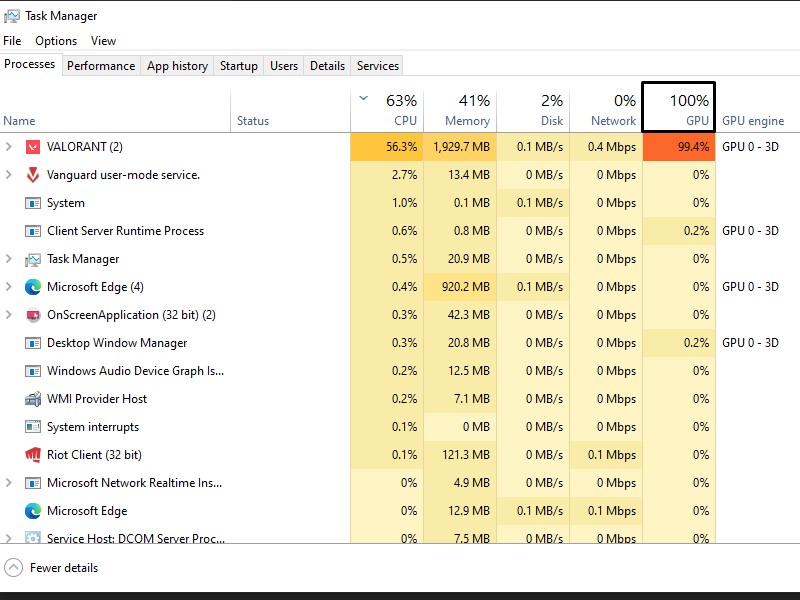 Is the Task manager showing 100% GPU Usage while playing a game, and, you’re worried about it? Well, you don’t have to worry about it. Because GPU is designed to work at 100% for maximum graphics performance. But, there are few things that you should check when GPU running at 100%. Also, If the computer is in idle condition means you’re not doing any graphics-intensive task, but GPU usage is at 100%. Then, it is something to worry about.

Yes, It is completly fine and good when GPU runs at 99% or 100%. Because that’s how GPUs are designed to work, full GPU utilization. It simply means that the game you’re playing is utilizing the maximum available resources to provide you maximum possible frame rate (FPS). 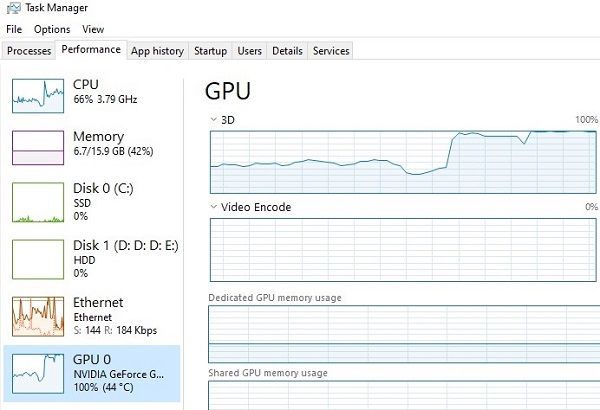 Though, when your GPU is not running at or near 100% while gaming, then it is considered symptomatic of a problem.

Here are some causes or cases that will help you to understand, why GPU is not running at 100%.

1. Game does not need many resources

Well, it is not compulsory for GPU to run 100% always. It could be possible that the game you’re running is a piece of cake for your GPU. This means the game does not need that many resources. Or in other words, you can say GPU is overpowered.

If you’re using a GTX 1060 Graphics card with a cheapo Core 2 Duo system. Then, the GPU will bottleneck for sure, and will rarely reach 60% usage. In this scenario, the Game will not able to utilize full GPU potential. This happens because the CPU cannot give enough data to GPU to keep it busy.

For a higher-end graphics card, you need at-least a Hexa core processor. So that CPU can keep the graphics card pegged at 100%. And should have some power in reserve to perform other graphics tasks.

Sometimes, due to faulty GPU drivers, Games not able to utilize GPU properly. Or, maybe, you’re using the lowest graphics settings in-game or you’ve limit FPS. In both cases, GPU usage will not reach 100%.

If you’ve purchased a second-hand graphics card, then this kind of problem occurs. Because every hardware comes with a life span. And, it is not wise to buy a very old graphics card.

This is something serious which you should consider. CPU and GPU temperature should always be in control. When GPU tries to provide maximum available FPS it gets hotter. And, which can lead to thermal throttling. Well, by capping your FPS, you can eliminate the thermal throttling issue. Or, simply use a liquid cooling system.

You should keep the GPU heatsink clean. So that GPU won’t lose its performance. Because dusty GPU will cause lack of airflow, and which rise GPU temperature. And, high temperature can cause damage to GPU components.

Important: GPUs are not designed for constant temperature change. Temperature change in GPU puts mechanical stress on the billion pieces of material. So, leave the game running if you step away from the PC for a minute or two. You can also use GPU Temperature monitor software.

In the earlier part of the article, I have mentioned that it is not good when GPU usage at 100% when you’re not performing any graphics-intensive tasks. Well, if you’re not playing games nor editing videos, nor watching high codec videos, and still task manager showing a 100% spike in GPU usage. Then, yes it is something to concern. So, here are the causes and solutions to it.

Since there is no apparent reason that causes this issue. So, simply you can restart Windows, this will temporarily solve this issue. Though, if you find this problem coming back then perform a clean boot.

You can reset the Crimson AMD settings. And, NVIDIA users can reset 3D settings from NVIDIA Control Panel.

It could be possible that malware is causing 100% GPU Usage in idle condition. I suggest you run a scan through Malwarebytes software.

Though, performing a clean boot will eliminate third-party services and fix the GPU usage issue. But, if it doesn’t then it might be a driver issue. In that case, boot Windows 10 into safe mode.

If in safe mode, you manage to keep GPU at 0% usage. Then, it means a program or driver is causing the issue. So, do uninstall the software and Apps which you think can be the cause.

If the problem occurs after a couple of minutes of restarting Windows. Then, there might be some program service that is causing 100% GPU usage in idle condition. In that case, open task manager > click on startup > Right-click on a startup service and then click on disable. Keep the important service enable, disable all else.

I hope now you know in which scenario, 100% GPU usage is good and bad. If you still have a question, leave a comment.